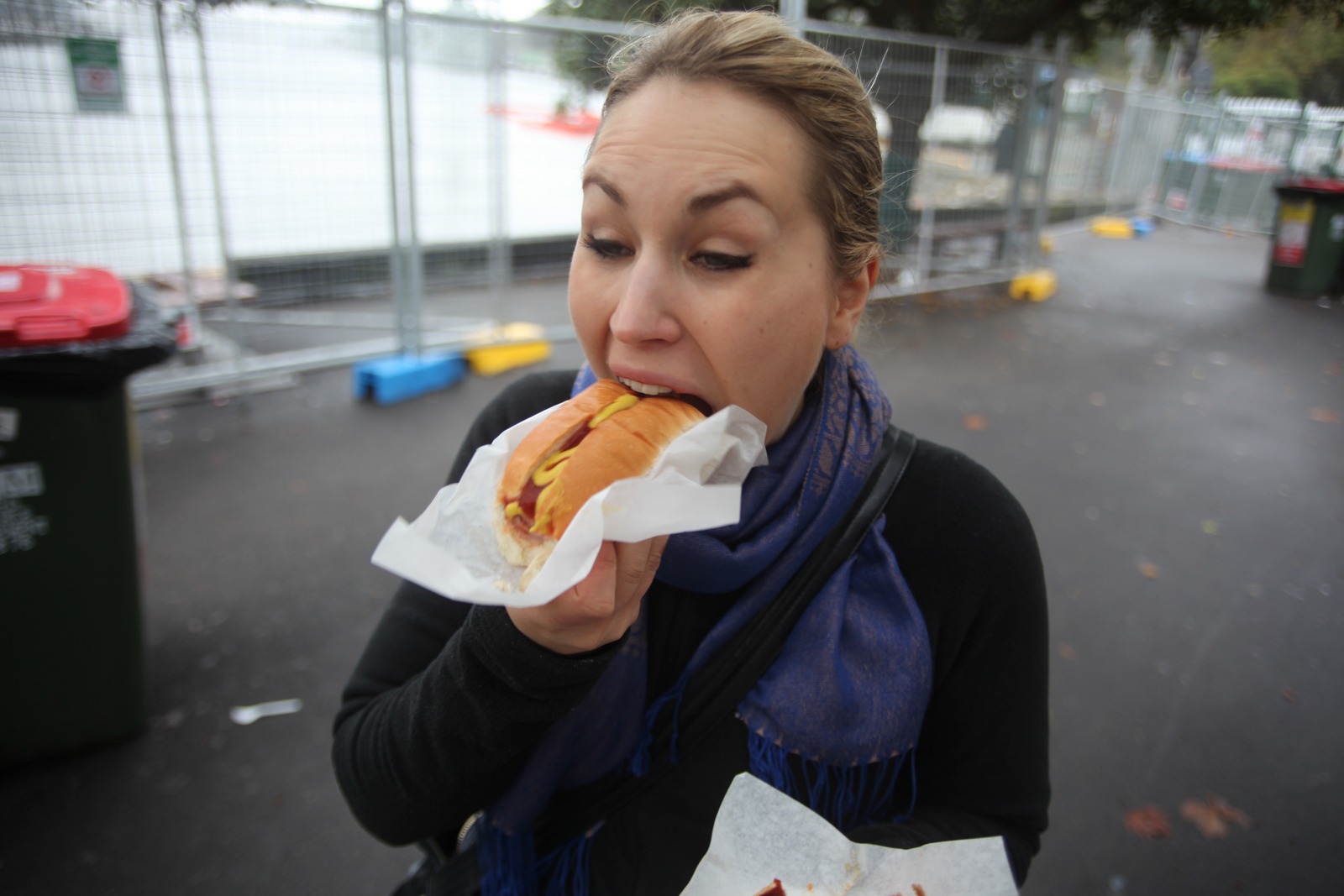 After spending a couple of years in Australia, you see a thing or two about their funny and peculiar food and drink habits. The most habits originate from Britain, but during the years, Australians have developed them one step further. First, you shake your head to these habits but soon they start to seem completely normal. In this post, I will share a couple of observations I have done during my time in the Oz. 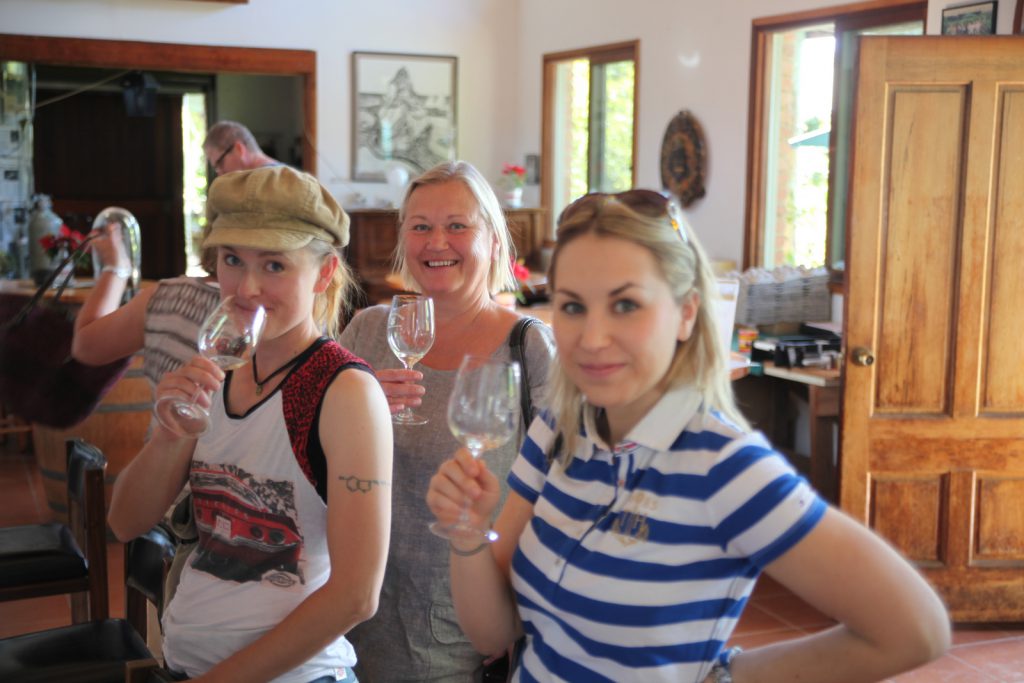 Apparently, it was the Australians who invented cask wine, or how the most Aussies call it, goon. One might be mistaken and think that the box wine they sell in your country is something similar that Australians have. Let me tell you, Australian Fruity Lexia is far from Jacobs Creek wine that you can find in a box in your country. The Australian version is cheap, will taste like old juice went bad and give you a headache in the next morning. Drinking box wine in Australia has a little bit of a stigma. At least in Finland, it is completely acceptable to bring box wine as a gift, but in Australia, this would be a definite no-no. Goon is consumed mainly by backpackers.

Anyway, Australians know how to enjoy their alcohol. 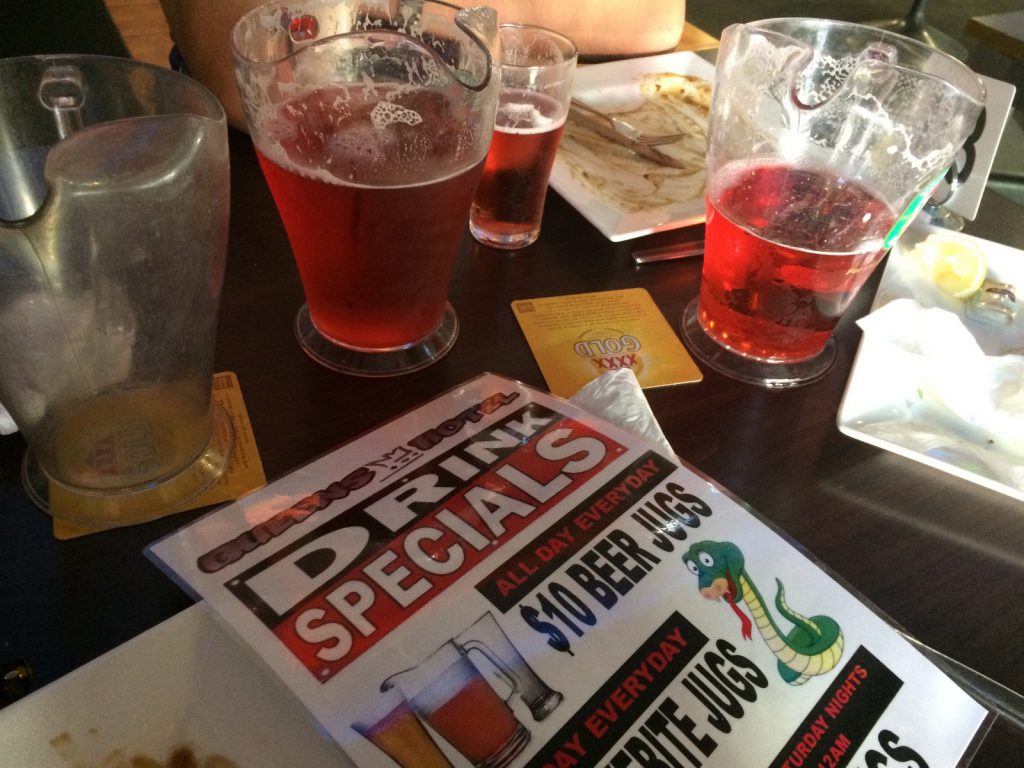 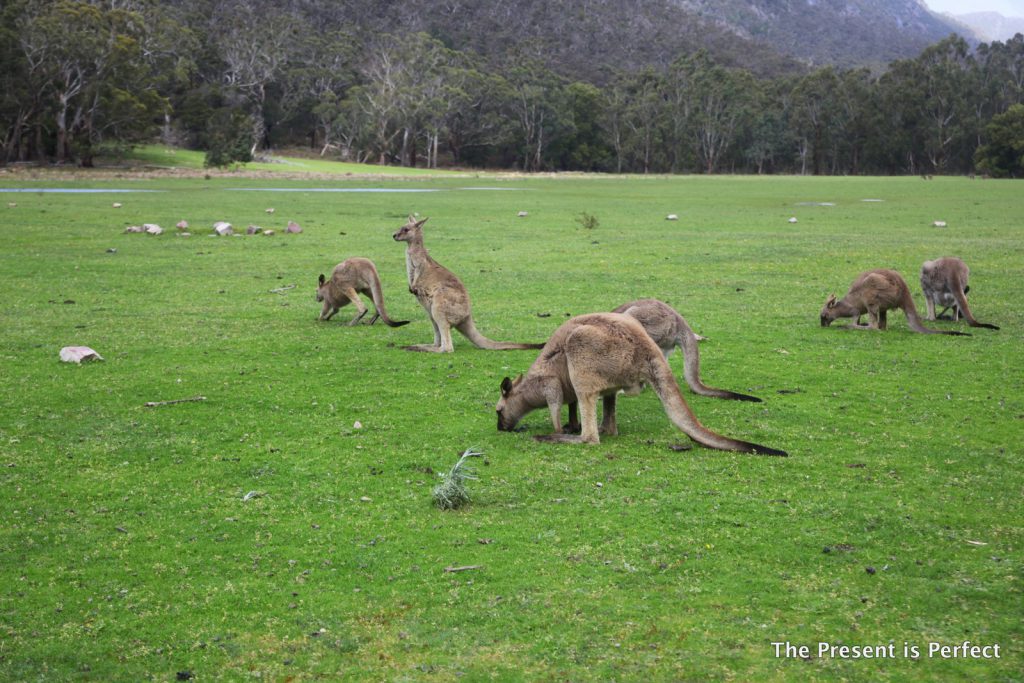 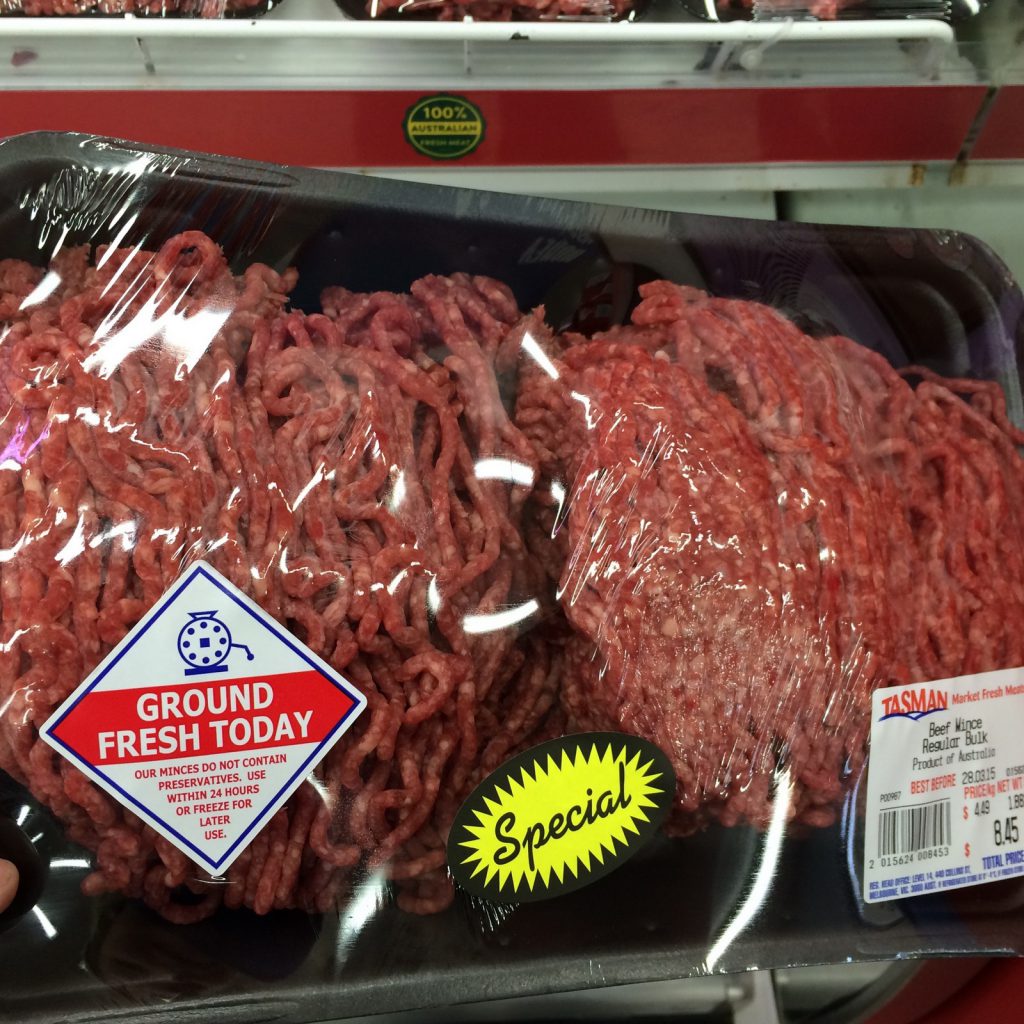 It is beef in the picture, but kangaroo meat looks pretty similar

Kangaroo is the most known animal in Australia. It is also a regular item at stores, and you can find kangaroo steaks, stir fry, mince and meatballs. Actually, kangaroo tastes pretty nice, and the meat has a gamy flavour and a low fat percentage of 2 %.

First I thought that people get hunting permits to kill wild kangaroos, but no. The majority of the kangaroo meat comes from farms.

One great Australian invention is drive-in bottle shops. You can just conveniently drive to a local liquor store and buy a new alcohol stock without even lifting your bum from the car seat. 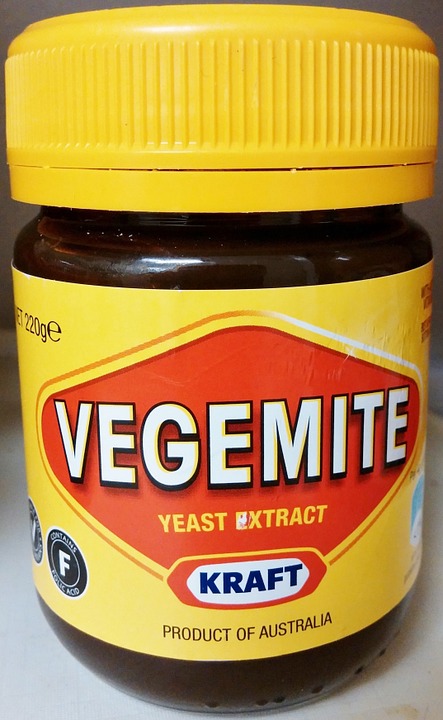 A local delicacy, Vegemite, is a common sight during breakfasts. The spread is produced from leftover brewers’ yeast extract by adding some herbs and additives to it. If you ask me, it tastes as bad as the description might suggest. Australians love to tease tourists and serve them a big spoon full of vegemite and observe reactions. Oh, and that is not all! Australians love to add vegemite to everything and you can even find Vegemite-chocolate!

I think in Australia you can find relatively nice chocolate and liquorice. But the candy selection otherwise is nothing compared to the amazing sugary heavens we have in Finland or in Sweden. If you were addicted to candy like I was, move to Australia and you will be cured!

Or maybe these treats won’t help to get over your sugar addiction: 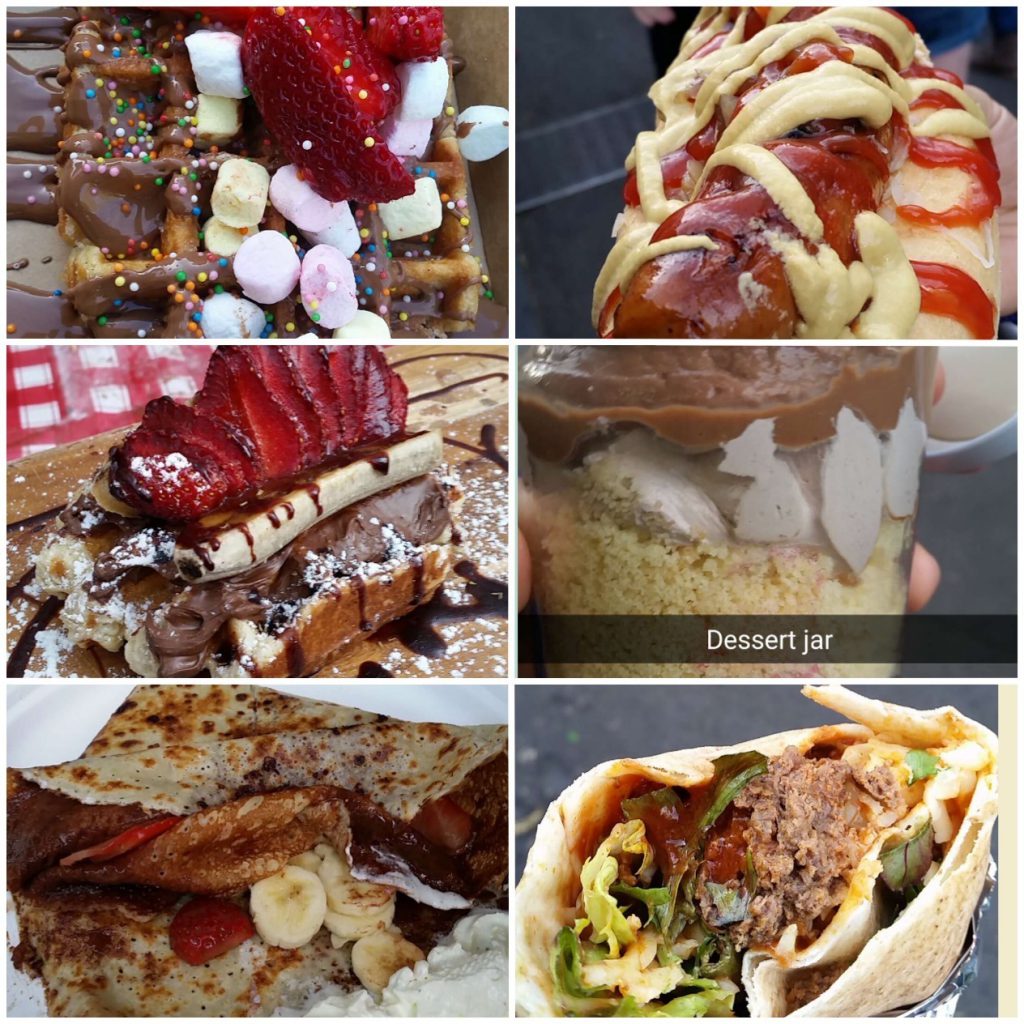 Tim Tams are chocolate-coated cookies. They are as nice as chocolate biscuits can be, but basically nothing mind-blowingly amazing. For some weird reason though, they are highly addictive! My favourites were salty caramel and double chocolate. Sometimes I was even so disgusting that I dipped the double chocolate ones into Nutella!

BYO – bring your own 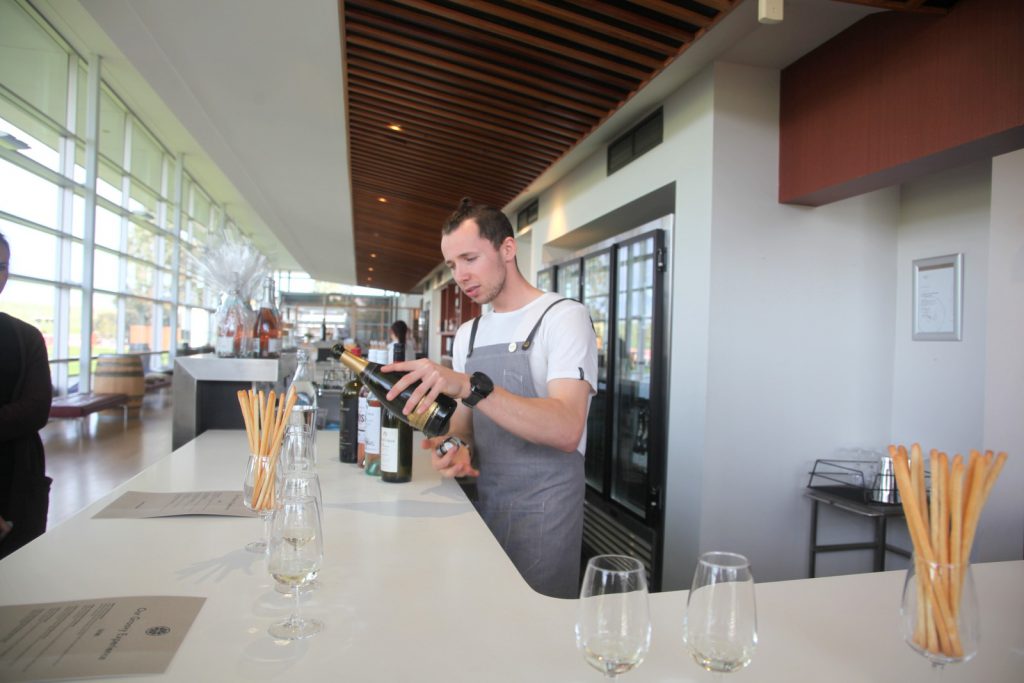 If you see letters BYO at the end of a restaurant name, it means that you are allowed to bring your own bottle there. Restaurants might charge a cork fee, always check this from the venue.

Australia has so many European immigrants that you are guaranteed to get your turkey roast for your Christmas meal. However, most Australians spend Christmas on the beach and barbequing. No wonder, since December is often the hottest month of the year (two years ago it was 48 degrees in Melbourne). To have a bit fancier barbie, however, the Australians grill shrimps and prawns or other seafood during the Christmas. For dessert, they have a big slice of Pavlova.

Beetroot in the burger

Italians might get shocked when they hear that you can have pineapple in your pizza in Finland, or banana in Sweden. I was surprised too when I learned that Australians often add beetroot to their burgers. I think it is a pretty nice combination but there are a lot of people who would rather skip the beet.

Getting dressed-up fancy and then drunk 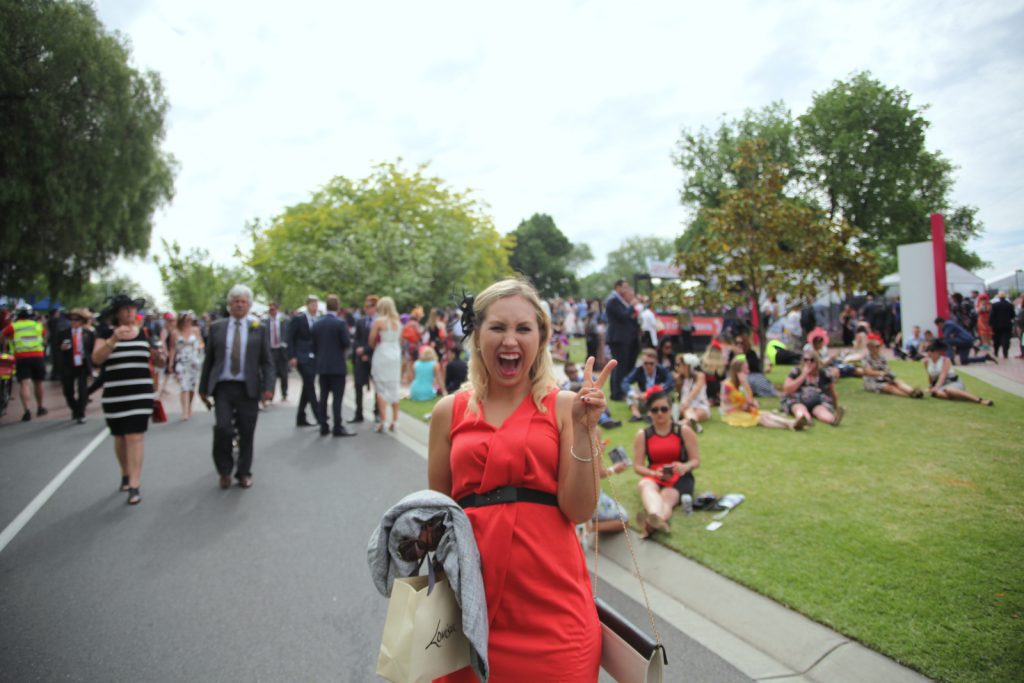 The Australians love horse racing. What would be more fun than putting on your best dress, finding a massive headpiece and gambling which of the horses will win the main prize. For me, it is a bit difficult to understand why some want to pay even 100 dollars for a ticket to Melbourne Cup (the biggest horse race in Australia) and don’t even see one glimpse of the horses. It is more like having a picnic in a fancy dress and using horses and gambling as an excuse to get pissed. 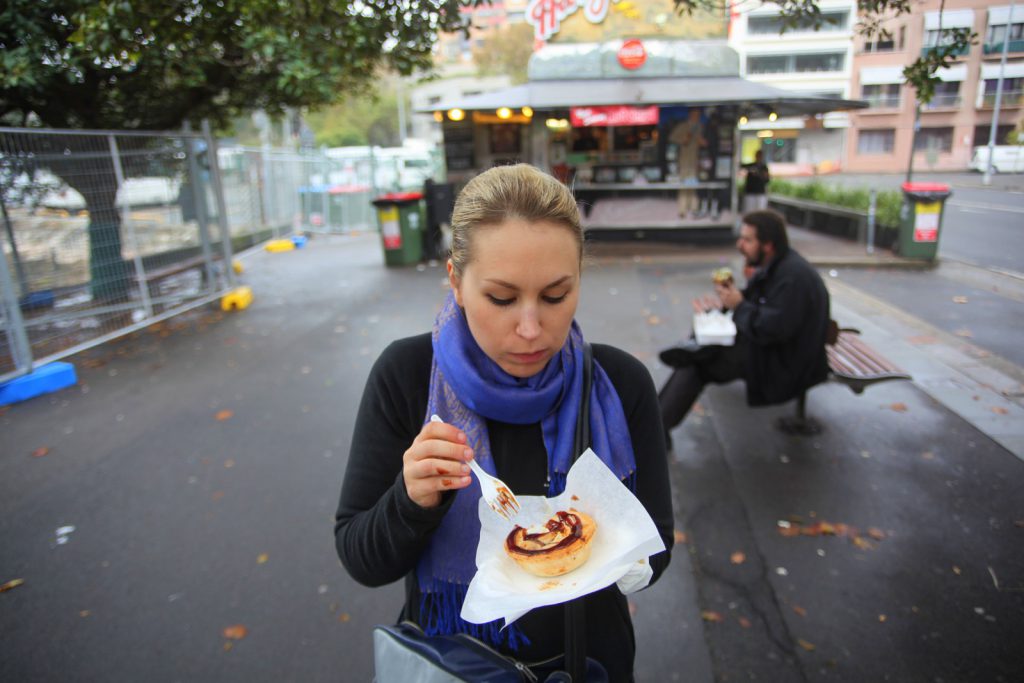 Meat pies are perhaps the most common fast food in Australia. I bet that every single small town and village has at least one bakery selling meat pies. These greasy treats come with different fillings: mincemeat, potato mash and peas, chicken, cheese, lamb, bacon – you name it!

Another greasy delicacy is sausage roll that is an Australian version of a hot dog. The sausage is baked inside the roll and you eat it with ketchup. Yummy? Nope.

In Finland, slushies are something that kids have while visiting an amusement park. However, in Australia it is completely ok for adults to have those icy colourful drinks. I give you this Australians, slushies are pretty nice when the temperature is over 35 degrees of Celcius! 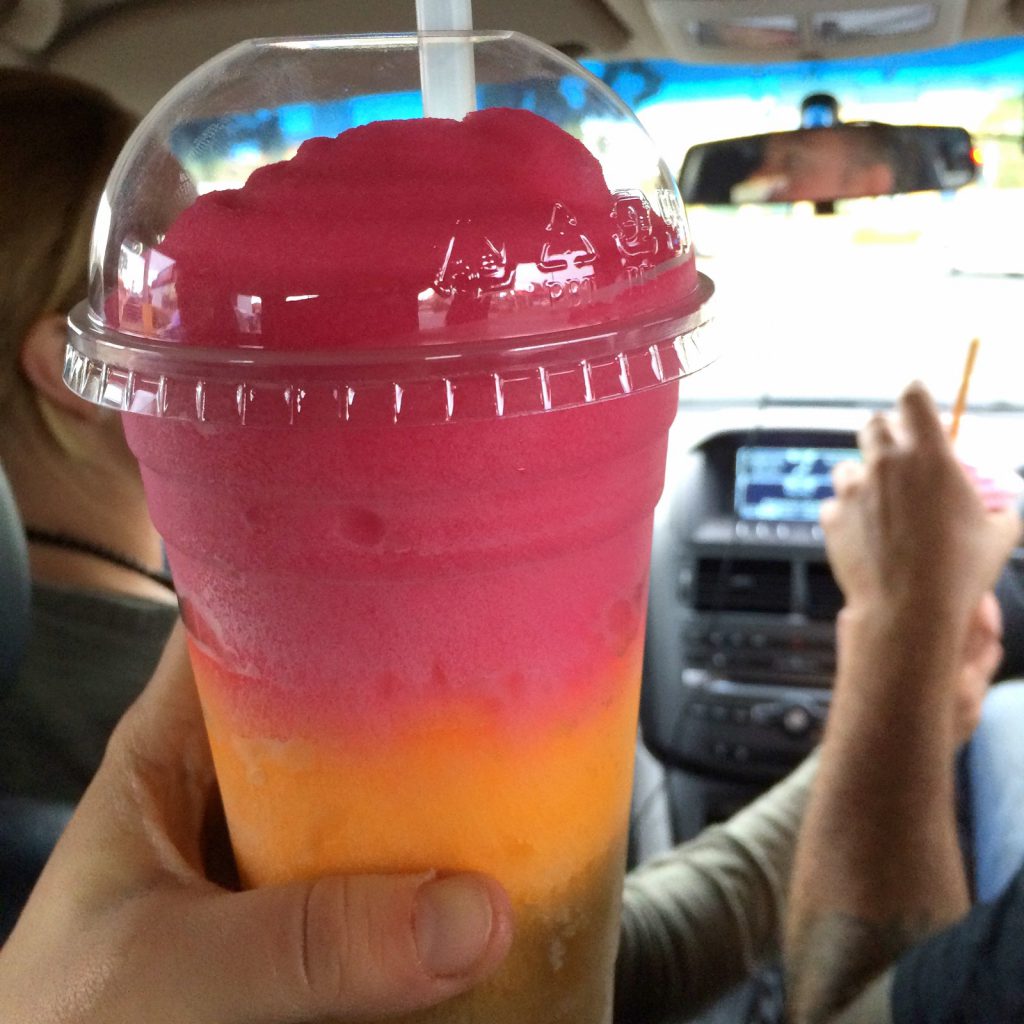 Like meat pie bakeries, you can find at least one fish and chips restaurant in every single Australian village. The food is packed around brown paper so you can take it with you and eat it in your car, on the beach or a park bench.

As a European, I am also quite surprised that Australians often serve their fresh fish and seafood dishes battered and deep-fried. I would love to have my fish or octopus only pan-fried in butter with a hint of lemon and salt. I can go to McDonald’s for deep-fried stuff. 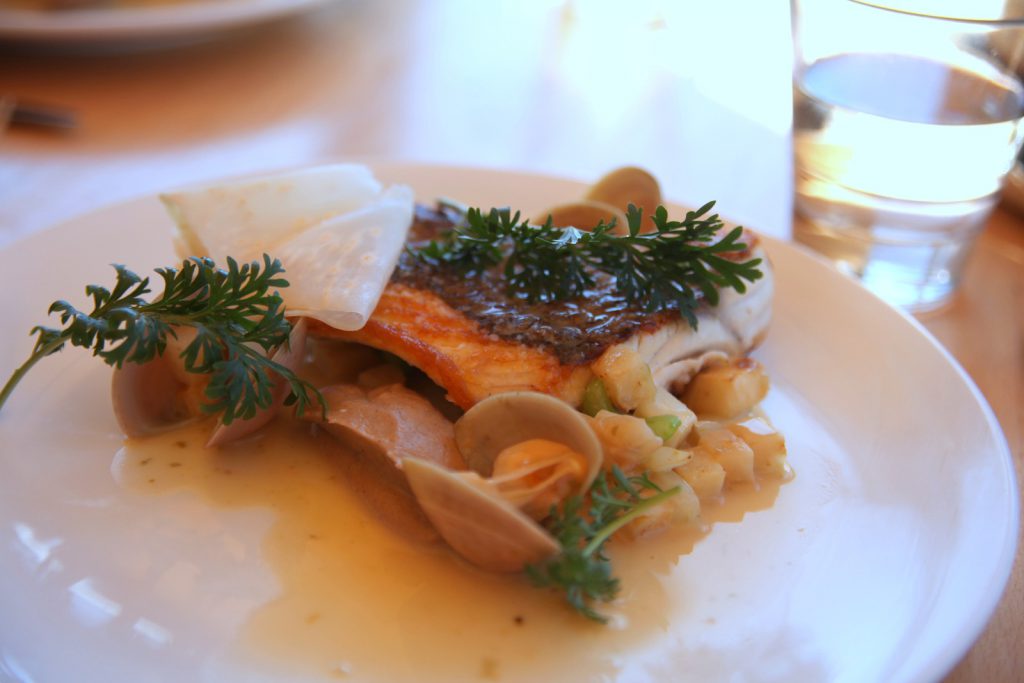 This is the way to go

Lamington is a pretty modest and dryish chocolate sponge cake with coconut flakes on top. There might be some raspberry jam in between, but not always. The Australians love their Lamingtons, and yes, it can be quite nice with a cup of tea.

Other local things that the Australians love are Anzac cookies (eaten on Anzac Day) or hot-cross buns eaten during the Easter days.

What are your favourites?

After reading this post, you might think that there are no real culinary traditions in Australia. That is not true since Australia, especially Melbourne, is full of amazing world-class restaurants.

How is it in your country? Do you have any odd food or drink habits? 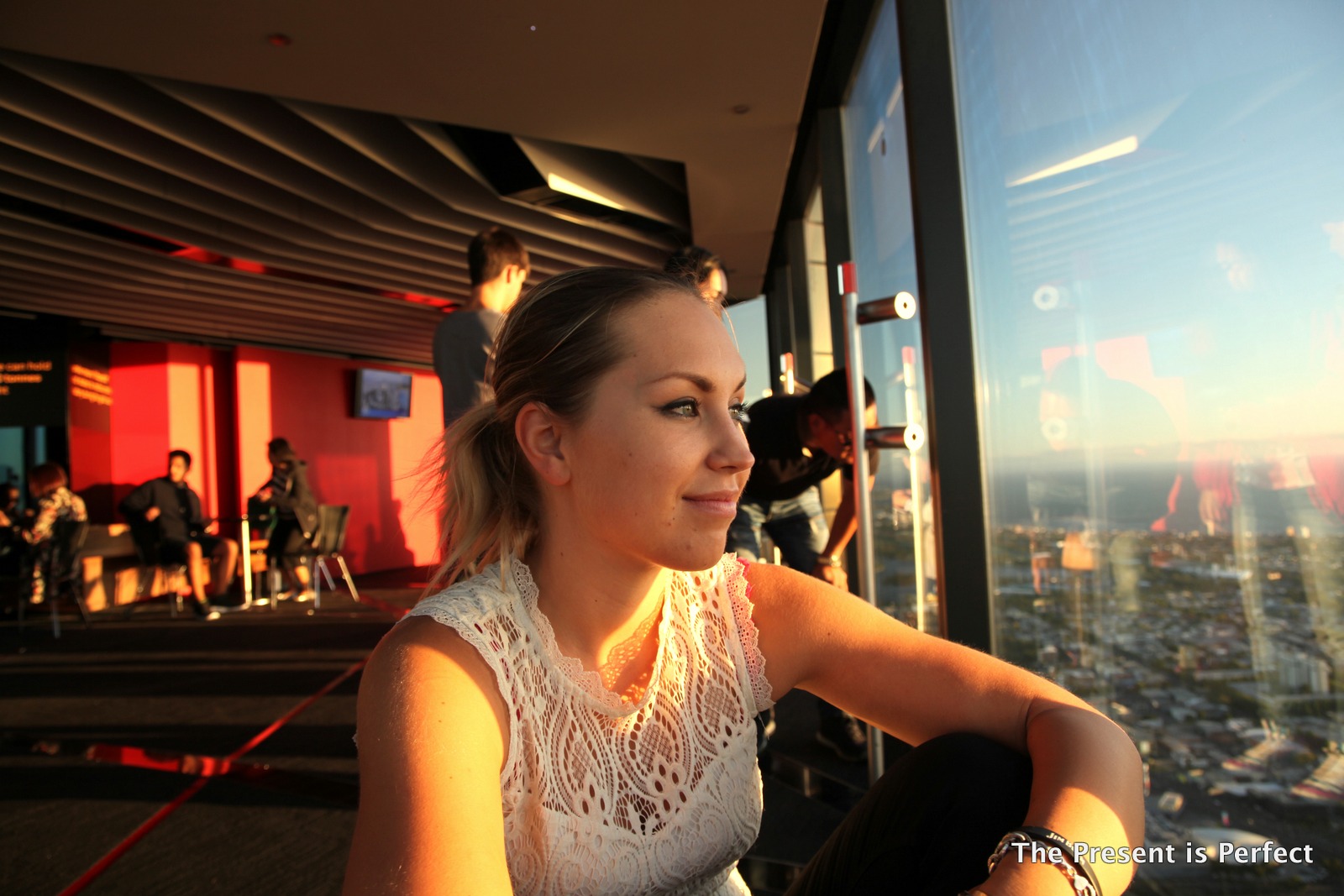 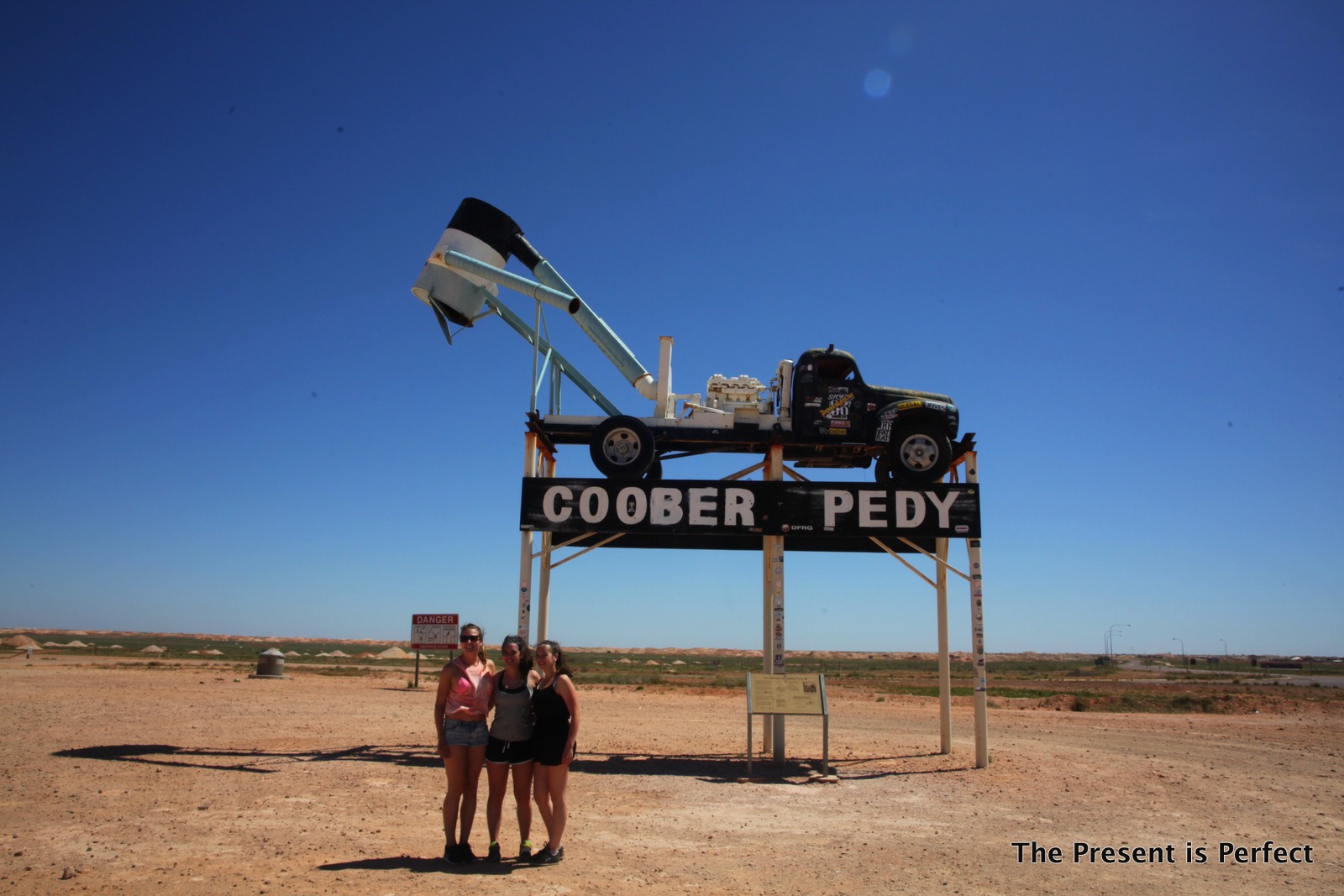 Visiting Coober Pedy – the opal capital of the world

Copenhagen in one day

8 random facts about me